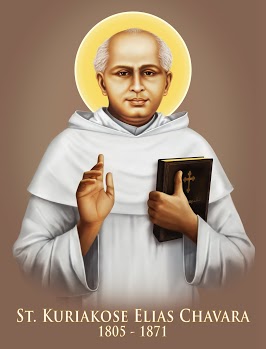 Kuriakose (Cyriac) Chavara was born in 1805, of pious and devout Catholic parents, at Kainakary, Kerala, India. After his early schooling in the native village and priestly studies under Fr. Thomas Palackal at Pallippuram, he was ordained priest in 1829.

In 1831, co-operating with Fr. Thomas Palackal and Fr. Thomas Porukara, he founded the first indigenous religious congregation for men, now known as the Carmelites of Mary Immaculate (CMI). It was after the death of his senior companions in the foundation that Fr. Kuriakose, together with the first members, made the religious profession in 1855. In religion he took the name, Kuriakose Elias of the Holy Family. Starting seven religious houses, including the first one at Mannanam, in different parts of Kerala, the new Congregation made great strides in the spiritual renovation of the Syro-Malabar Church. Seminaries for the education and formation of the clergy, introduction of annual retreats for priests and people, a publishing house for the propagation of Catholic doctrine, a house for the dying and destitute, special attention to catechumens and schools for general education, were a few among the various activities of the Congregation under Fr. Kuriakose Elias' leadership. Fr. Chavara also introduced valuable improvements and reform in the Syro-Malabar liturgy. In 1866, with the co-operation of Fr. Leopold Boccaro OCD, he started the Congregation of the Mother of Carmel (CMC) for women. When a schism threatened the Church in 1861, Fr. Kuriakose Elias Chavara, the then Vicar General of the Syro-Malabar Church, took a strong stand and gave effective leadership in thwarting Thomas Roccos' intrusion and saving the Church in Kerala from schism.

Fr. Chavara has also written a number of books in pros as well as in verse with unique spiritual vision. His counsel to the Christian families given in the form of the 'Testament of a Loving Father' is applicable and relevant to this day. Essentially a man of prayer and intense charity, he lived in close communion with the Lord amidst his several religious and social activities. Owing to his deep spirituality that permeated all his actions, he was accepted and referred to as a man of God, from his early years. In 1871, on January 3rd, Fr. Kuriakose Elias Chavara, after a short but painful illness, passed away at Koonammavu preserving his baptismal innocence unto death. He was buried at St. Philominas Church first later his mortal remains were transferred from Koonammavu to Mannanam in 1889 and has been reinterred in St. Joseph's Monastery Church at Mannanam. The diocesan process for his beatification was inaugurated by the Archbishop of Changanassery on 3 January 1958 on the request of the late Fr. Maurus CMI, the then Prior General. The Congregation for the Causes of Saints, after having scrutinised the writings of the Servant of God and other relevant documents, formally introduced the cause on 15 March 1980. On 7 April 1984, Pope John Paul II solemnly recognised the heroic virtues of the Servant of God and elevated him to the status of Venerable. On 8 February 1986, during his historic visit to Kottayam, Kerala, Pope John Paul II raised Venerable Kuriakose Elias Chavara to the honours of the altar declaring him 'Blessed'.